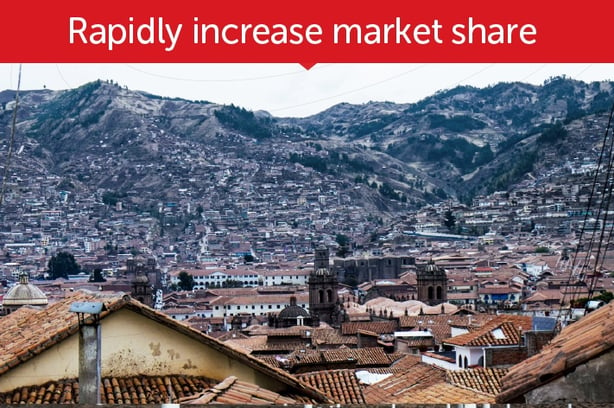 A large telecommunication operator in Latin America was faced with a great challenge: It wanted to significantly increase its market share, currently at ~10%, by quickly enhancing its network coverage and acquiring new paying customers.

That called for a significant network expansion to new areas and cities it did not have coverage in, yet. But deploying fiber in these areas could take months or even years, and while they considered wireless backhaul as a good interim solution for initial penetration, they were concerned the required capacity might exceed the capabilities of common wireless backhaul systems long before fiber lines are set. This made this operator’s coverage targets seem almost impossible.

Ceragon’s FibeAir IP-20 Platform enabled quick subscriber acquisition and new revenue streams, despite the lack of backhaul spectrum in the country. The solution offered the carrier:

The Ceragon single product offering was based on a combination of the FibeAir IP-20N and the multicore FibeAir IP-20C radio. Using a single radio solution across the entire network enables the customer to deploy its new network in record time – saving on planning as well as deployment and commissioning time, hence allowing it to roll out its network 3 months early!

This 3-month early network rollout generated significant revenues for the customer – for instance, a newly served, average sized city with a population 1M in which the operator was able to gain a 10% market share at a ARPU rate of $20 translates into a revenue-gain of $6M!

Moreover, Ceragon’s unique multicore technology allowed the operator to overcome its wireless backhaul spectrum constrains and provide 500Mbps and, with 4x4 LoS MIMO technology, as much as 1Gbps over a single, scarcely available 28MHz channel.