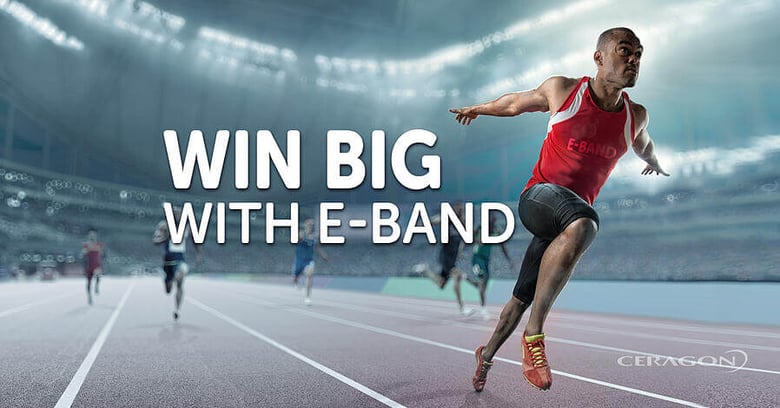 Enterprise networking is becoming more and more crucial to organizational business continuity. This is due to the unprecedented change driven by the adoption of cloud applications. Corporate use of customer-relationship management (CRM), video collaboration and streaming, voice-over-IP, cloud computing, and analytic programs are driving a surge in network capacity demands. Enterprise connectivity has grown dramatically from 100s of Mbps to multi-Gbps rates.

Yet a global survey by Accenture of senior IT and business executives from large enterprises reveals that only 38% percent of respondents are “very satisfied” with their bandwidth capacity. Therefore, to effectively carry massive amounts of data previously sent to internal servers and to shorten download and upload speeds, a new nonconventional spectrum – where huge bandwidths are available – is now required.

Progress has been made in enterprise broadband connections throughout the US, and fiber availability has increased to 65% for businesses with 20+ employees. Despite these developments, there is a large number of cases where “last mile” access connectivity, at the right capacity and price, is not available at business locations.

The situation is far worse in Europe. While the vast majority of European businesses use broadband, only 44 % of companies have “fast” broadband (of at least 30 Mbps), with DSL being the most widely used fixed broadband technology. Fiber to the building (FTTB) and fiber to the house (FTTH) together account for just 16 % market share in the EU member states.

The last mile in telecom transport has always been the most difficult portion of the network to construct with a reasonable return on investment (ROI). The deployment of optical fiber costs between $20,000 to $30,000 per mile and is not always financially justifiable for freeing up the “transmission bottleneck” or for backhauling purposes.

To avoid costly fiber deployment or leased lines, Internet service providers (ISPs), large enterprises and municipalities have turned to license-exempt sub-6GHz and specifically 5.xGHz bands. These solutions offer free-of-spectrum-charges connectivity, which, in theory, can accommodate bidirectional traffic of as much as 700Mbps.

E-Band mmW as an alternative to fiber and sub-6GHz

However, there is another set of frequencies that has emerged as an alternative to sub-6GHz connectivity and can generate gigabit short-range communications for the enterprise market. While some short-range wireless links will still be in the license-exempt sub-6GHz band, the broadband industry is shifting its attention to E-Band frequencies of 71-86GHz. E-Band is gaining momentum and its shipments are poised to grow at 36% CAGR through 2024.

On the regulation side, more and more countries are making E-Band mmW available for high-density fixed wireless services. BIPT, the Belgian regulator, has proposed to allocate the E-Band spectrum in 71-76GHz and 81-86GHz frequencies. It plans to share the spectrum among the country’s three national MNOs (Orange, Proximus, and Telenet) to allow them to deploy wireless backhaul. The three operators will each be granted a 1GHz block of spectrum, while they and other users will also be able to deploy links using the remaining 1GHz and 0.75GHz blocks.

Swedish communications regulator PTS decided to allow fixed radio use in the entire 71-76/81-86GHz range. The FCC is advancing changes for better use of the 70/80/90GHz bands, including allowing smaller antennas to support wireless backhaul.

E-Band spectrum fees range from zero in the Czech Republic and Mexico to around 150–450USD for a typical lightly licensed link in the US, UK, Australia, India, Qatar, Russia, Canada, Germany, Nigeria and other countries.

Service providers across the world are rolling out multi-gigabit speeds and delivering gigabit services to businesses using the E-Band mmW spectrum. Spectrum in these bands is used to provide fiber-like bandwidth for last mile connectivity or as a substitute for leased fiber on transmission access rings where high capacities are required. Many ISPs utilize E-Band links to backhaul from one micro-pop to another. Other service providers use E-Band radios with a fiber backbone to backhaul 10 Gbps wirelessly and deliver high-capacity service to their customers.

The adoption pace of E-Band mmW solutions supplied to enterprises by mobile operators and service providers continue to accelerate. However, there are plenty of organizations with in-house telco staff that may benefit from the cost-effective and ultra-high-capacity connectivity that E-Band technology is capable of offering.

Hundreds of smart cities have already deployed E-Band systems for video security, public Wi-Fi backhaul, municipal networks, and more. For example, the city of Jerusalem is building a unified wireless network that will leverage its buildings as interconnection points to provide high-speed Internet service in public spaces, municipal buildings and educational institutions. The network will also connect thousands of security, traffic control and parking management cameras at speeds ranging from hundreds of Mbps to 10Gbps.

Corporate LAN connections in London using 1Gbps E-Band radios have been deployed for corporate customers above the busy city streets as a high-speed and cost-effective alternative to fiber.

Large industrial companies are deploying E-Band mmW radios at their plant sites, storage depots, distribution stations, and office locations to backhaul security and surveillance HD camera video to their monitoring stations. They also are creating LAN connections among their buildings.

Hospitals and university campuses with multi-building sites are deploying E-Band links among their buildings to consolidate their ICT infrastructure and enable effective information management.