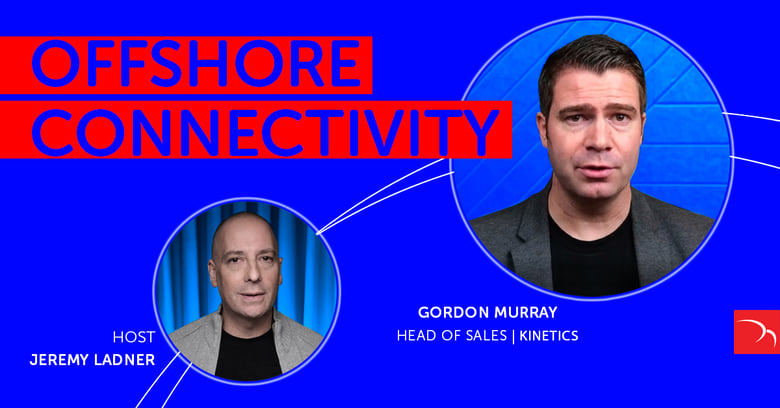 There is an ocean of unique challenges to navigate when setting up high-throughput low-latency offshore connectivity. The distance from shore, the harsh weather, and the ceaseless motion of the waves can test the limits of even the toughest network designer. Ceragon’s Kinetics division handles it all expertly utilizing a combination of specially designed stabilization hardware and years of field-proven experience.

Ceragon Kinetics holds several world records for offshore wireless connectivity in areas of greatest distance and difficulty. If you are looking to establish, expand, or upgrade your offshore connectivity solution Ceragon is ready to help. How do you get high-speed wireless connectivity in the middle of the ocean? We'll find out on this episode of The Backhaul Lounge. Hi, welcome to Ceragon’s Backhaul Lounge. I'm Jeremy Ladner, and today we're speaking with Gordon Murray, Head of Sales at Ceragon Kinetics, about the challenges of delivering offshore wireless network connectivity across 100km or more of open sea. Gordon, thanks for joining us.

So, before we dive into the distance question, for those that are not familiar with Ceragon Kinetics, Gordon's unit specializes in stabilized connectivity, typically offshore for networks that have one or more links that are physically in motion. Just imagine the massive waves, the pitch, the yaw, the roll. Gordon, am I getting that right?

That's right Jeremy. If we've got one side or both sides of the links, which have movement due to the offshore vessel or the offshore asset being a floating platform, we can stabilize it, giving it the high reliability of Ceragon’s multicore radios combined with our stabilized PointLink platform, which means that ultimately they get the same high-throughput, low-latency benefits offshore that we can deliver onshore.

All right. So, let's talk about the high-throughput and low-latency in a minute. But first, let's deal with the distance question. Do customers even know that microwave is an option for them for 100km+ offshore connectivity?

- Well, let's just say many customers are pleasantly surprised when they hear that we can deliver that level of bandwidth at that distance. We've delivered solutions that are more than 175km. The world's longest link to an offshore oilfield off the coast of Brazil. And we've also got the world's longest offshore link to an FPSO. So that's a floating and rotating FPSO more than 120km offshore. And the benefits that they can get by having high-throughput low-latency as far as they are from the beach is massive to their operation.

Right. So, when you compare that to some other technologies that are available, obviously people are going to have satellite and fiber top-of-mind. I know the idea of laying fiber for 100km or more is going to be terribly time-consuming, not to mention expensive. And satellite obviously has some limitations in terms of latency. Can you speak to that a little bit?

- Yeah sure, there are many technologies out there right, And I think you hit the nail on the head when you mentioned the issue with the cost. So obviously a wireless link is quicker to deploy and lower cost to deploy. However, also with regard to satellite, the challenge is always going to be the latency side of things. So, we don't necessarily see ourselves always competing with these technologies, often complementing some of those technologies.

Yes, we can provide the lowest latency possible, and we can provide the highest throughput, but we also look to where the backhaul is fiber or the backhaul is satellite. We can provide overlay technologies to allow them to distribute that wirelessly either to another asset or to assets close by, such as vessels or other drilling rigs, and so on and so forth. So yeah, we certainly have fantastic technologies. The lowest latency you're going to get. Some of the highest throughputs possible. And we look to work in hybrid with many of these other solutions.

That was very diplomatic and very well put, I love it Gordon, thank you very much. Now let's talk about the numbers. I know they're going to vary depending on the exact distances, of course, but generally speaking, what can customers expect in terms of bandwidth and latency?

- In terms of bandwidth, it's not uncommon for us to be delivering 200Mbps to 300Mbps. which again is pretty much unmatched by any other wireless technology that's available. So, the benefits are 200Mbps to 300Mbps offshore, low-latency. It's a huge, huge operational benefit for the digital transformation technologies that they're looking to deploy. And in some cases, we can even go up to 1Gpbs which, if you consider the demands being put on the operation, not just from an operational expectation side of things, but also the crew side of things, It's a huge, huge operational benefit to them when you can deliver several hundred megabits up to 1Gbps offshore.

You mentioned the crew there, and there's a lot of people, of course, who are working offshore for several weeks at a time, long, long shifts far from home. And this is their only connection with family and friends. Clearly, that connectivity is very important to the crew's health and well-being. Another massive benefit to having a high-throughput, low-latency network is all of the new real-time video applications that have a major impact on operational efficiency and safety. Can you talk a little bit about that? What are the most common ways your customers are using the speed in terms of applications?

- Yeah, so I think one of the biggest things is the remote operation. That’s taking remotely operated vehicles or things that would have often been done at the edge and now they can distribute that back to the Real-Time Operating Center, the resource and the skills that may not be out there at that point in time. So that they can become much more operationally efficient. So that requires reliability. It requires a foundation and a backhaul which they can then deploy these fantastic technologies. So whether it's using it for remotely operated vehicles, real-time video applications, CCTV, smart CCTV, you know, that combined with many of the applications, Jeremy, that we are now use to more and more right in the office, like Microsoft Teams, Zoom, various other Web platforms.

What they're really looking for is a way to make the FPSO or the asset offshore act almost like a remote office, having access to the same capabilities and applications. That requires solid, high-bandwidth, low-latency backhaul. And that's where we can support them.

Exactly. So, if you can get this FPSO that is 175km from shore to act as if it's just down the hall, it's better for everyone in terms of efficient communication and operation. Gordon, what is the best way for folks who want to know more to get in touch with you?

- people can get in touch with me directly - They can drop me an email, they can also contact me via LinkedIn, or they can go to the Ceragon website and click on the Contact Us button and we'd be happy to look at new opportunities and how we can support this industry to become more operationally efficient, better for the crew and crew welfare. We're happy to have these discussions and look forward to supporting more energy and offshore customers. Get in touch.

Wonderful. That sounds like a great place to wrap it up. Gordon, thanks for joining us.

And thanks to all of you for watching. I'm Jeremy Ladner and this is The Backhaul Lounge.