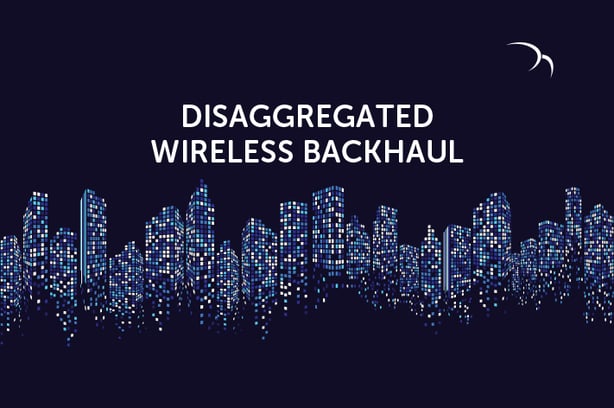 Implementing the disaggregation concept in wireless backhaul is the latest innovative approach for resolving the unique and multidimensional 5G challenge curve.

In the last couple of blog posts we discussed unique 5G challenges that affect the requirements and innovation path of 5G wireless backhaul solutions. The multidimensional challenge curve includes requirements for deploying more sites, building much more capacity, enabling multiple 5G use cases over the same network, and dealing with mass deployment.

An additional topic we covered in those blog posts was the concept of disaggregation. This concept is crucial when it comes to resolving the aforementioned 5G challenges. While disaggregation typically has been practiced in data centers and core telecom systems, extensions of this concept are relevant to new network domains – one of which is wireless backhaul.

When talking about disaggregated wireless backhaul, we mean more than just separating HW and SW. We also need to consider the radio element, which is a main component in a wireless backhaul solution. This calls for a three-element split of the traditional, monolithic structure of wireless backhaul systems, as illustrated in the following drawing:

Traditional wireless backhaul solutions combine a radio unit with a networking unit (HW & SW) into a single solution, based on proprietary HW. Such a solution cannot be broken down into independent components.

The disaggregated wireless backhaul solution, on the other hand, includes several elements that are independent of each other. In this case, the radio element could be used as a stand-alone radio (an “all-outdoor” wireless backhaul solution) or could connect to an indoor networking unit. This indoor unit could be a combination of the networking HW and networking SW elements, or could be any other switching or routing platform (as the connection to the indoor unit is based on a standard Ethernet interface). In a similar manner, the networking HW element could be based on merchant silicon. As such, it could be easily replaced or upgraded to a more powerful unit, while keeping the networking SW and the radio elements intact. This could not be achieved in the proprietary environment, where development of the radio, networking HW and networking SW elements are highly dependent on each other.

The disaggregated three-element approach provides enhanced flexibility. Developing new features and supporting new network architectures and protocols can be done regardless of the underlying HW, and can be easily implemented on any COTS hardware with a supporting configuration.

This new concept – disaggregated wireless backhaul – allows us to resolve 5G wireless backhaul challenges in a better way. Creating independent innovation paths allows us to resolve capacity and densification challenges with enhanced radio technology. It also allows us to handle 5G use cases by performing service orchestration via network slicing, achieved with advanced networking capabilities and SDN support. All those are developed as part of the networking software element, regardless of the radio or networking hardware elements. Mass deployment and massive network management and optimization are improved by utilizing those SDN tools and by reducing the number of solution variants, thanks to the increased flexibility of the disaggregated solution.

There are now. Ceragon will introduce such a solution at MWC 2019 later this month, and we will discuss this solution in detail in our next blog post. Stay tuned…