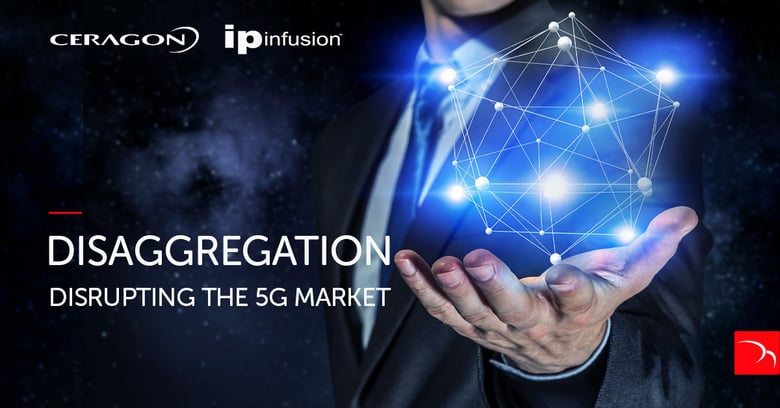 In this blog, Dani Kiryati (Ceragon) and Sanjay Kumar (IP Infusion) outline how the companies collaborated to use disaggregation to disrupt the 5G market.

Through its disaggregated network design, IP Infusion's OcNOS® platform allows network architects to design and build their intricately catered systems from the ground up. Its modularity allows each system component to be handpicked and selected with care. No longer do devices need to be tied to a specific vendors' software. Architects are handed the freedom to choose the most efficient and cost-effective way to construct their network.

One of the most significant advantages of IP Infusion’s OcNOS® is its ability to couple together with a host of the most leading-edge technologies at an operator's discretion without having to worry about software incompatibility. As such, this makes OcNOS® the ideal network operating system for the deployment of an industry-disrupting solution like Ceragon’s Radio-Aware Open Networking (RAON) technology.

Wireless network components are objectively more finicky than their wired counterparts. Because of the sheer number of variables within the networks that can shift at any given time, a wireless network's capacity is less predictable and is constantly in flux.

Many networks lack a way to enable a line of dialogue between their wired and wireless portions, causing incredibly inefficient data flow that doesn't ebb and flow alongside its ever-changing wireless capacity. This negatively impacts device performance and increases dropped traffic, which leads to loss of money, time and resources.

Concepts such as Radio-Aware Routing (RAR) and Microwave Adaptive Bandwidth (MAB) have emerged to combat these issues but are often subject to vendor lock-in. As such, they are incompatible with legacy networks without sinking an astronomical cost into a ground-up network redesign. Although both these technologies have been available for years, they have yet to be widely adopted due to this glaring issue and, as a result, have become stagnant in their lack of any innovation.

That’s why RAON is such a groundbreaking development for network systems and design. The integration of IP Infusion’s OcNOS with Ceragon’s RAON solution enables network architects to take drastic leaps in efficiency and productivity.

With IP-50FX, customers can now integrate these newfound CSR capabilities seamlessly into their networks at a far higher quality than those stagnant alternatives that have been offered in the past by large vendors. Adopting the disaggregated approach at the cell site level allows operators and private networks to densify their networks and run them more cost-effectively. They also now have the freedom to shop around for the "best-in-class" components for their specific network and no longer need to worry about unnecessary fees or improperly allocated resources. Furthermore, both OcNOS® and IP-50FX deliver a diverse range of networking use cases, enabling network architects to create innovative services and create new revenue streams.

Learn more about the IP Infusion and Ceragon partnership and the IP-50FX DCSG.